What Is An Arc Fault Breaker? 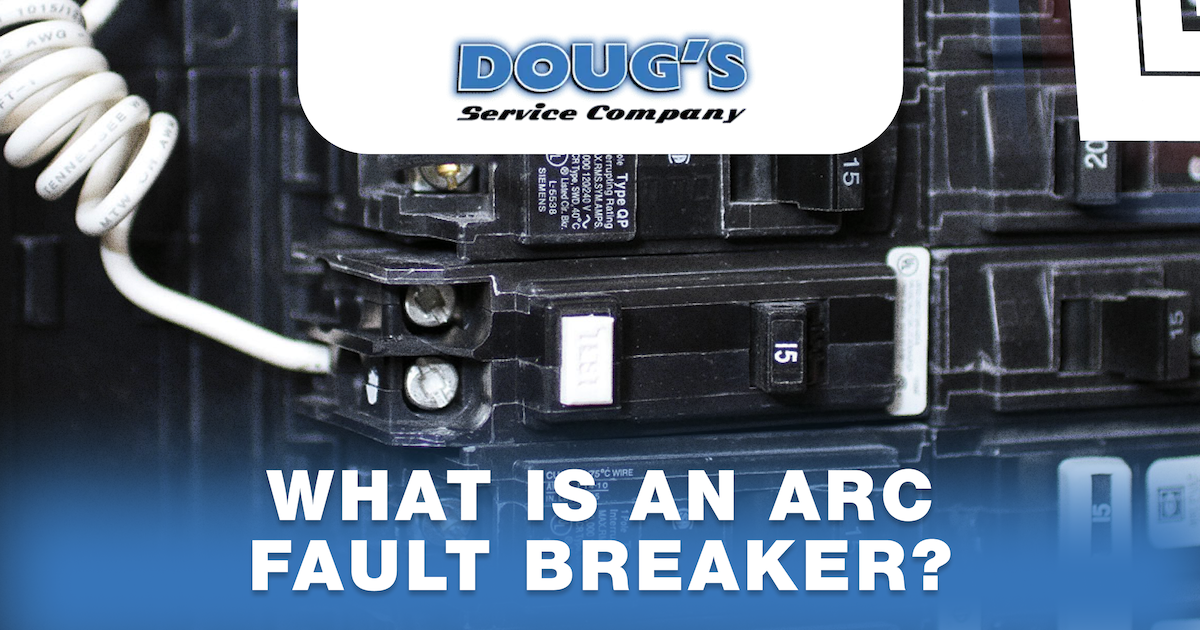 The world of heating, ventilation, air conditioning, electricity, and plumbing is complete with its own terminology that is often foreign to us. Without formal electrical training, there are certain electrical parts many people do not know about. This article will begin to explore one of the parts called the arc fault breaker (AFCI). We will define this vital part and answer some of the most common questions we get about it.

Whether you’re a new homeowner or someone who just isn’t versed on electrical codes, you must understand the importance and definition of an arc fault. An arc occurs when there is a change in the electrical currents that causes discharge between conductors. An arc fault is when the a current of electricity takes on an unplanned path.

To some folks, this may not sound like a big deal but it is actually a potentially dangerous situation. Arc faults create high intensity heating where the arc peaks and causes it to burn everything in its path. It can create a fire and burn surrounding structures, including insulation, wood framing, and other materials. An arc fault breaker is therefore, a must for the safety of your home and family.

How An Arc Fault Is Detected

Because arc faults can be potentially hazardous, an AFCI is needed to detect and break any dangerous arc faults. An AFCI uses advanced technology to monitor the circuit’s arcing conditions. It has the ability to detect and differentiate between normal and dangerous arces. With the help of these sensors, the arc fault breaker will instantly shut down the entire circuit in the event of a dangerous arc fault. This breaker serves as protection for the home, preventing fires and other dangerous situations.

There are three different arc fault breakers that are most often used to break an arc fault. These breakers pass a list of rigors testing and are the national standard for AFCIs. Below is a quick snapshot of the types of circuit breaker AFCI that are currently found in homes:

This breaker is found at the origin or panelboard of the branch circuit and detects arcing faults occurring line-to-line, line-to-neutral, and line-to-ground. This type of breaker AFCI is most commonly found in older homes that use shared neutral circuits.

The combination arc fault breaker takes the protection provided by the branch breaker a step further, all the way down to 5 amperes. It detects arcing in both branch circuits and power supply cords.

This type of breaker provides dual protection against arcing and ground faults. Some AFCIs come with built-in GFCI protection, while other AFCIs do not. In that case, a GFCI receptacle would have to be installed separately.

Why Are AFCI Breakers Important

The installation of arc fault breakers is an important safety measure that is put in place to protect your home. Prior to AFCI breakers, there was an increased number of housefires that were caused by electrical problems. The protection offered by AFCIs is so significant that the National Electrical Code now requires its installation in every home and building. The following is a list of places or dwellings that require an AFCI breaker:

The general rule is that all 120-volt, single-phase, 15 and 20 ampere branch circuits will require the installation of an arc fault breaker. This requirement is a safety precaution that will help aoid fires caused by electrical difficulties.

Have Electrical Questions About Your Home?

Clearly, AFCIs are a very important electrical safety feature in your home. However, without a skilled electrician’s advice and services, it is sometimes hard to pinpoint such crucial necessities. Doug’s Service Company consists of skilled and highly experienced electricians who are ready to answer your questions, inspect your electrical systems, and provide any necessary repairs. Contact us today to schedule your visit.

Doug’s Service Company provides the most top-rated electrical services in Thibodaux, Houma, Kenner, and surrounding areas. Call us today at 985-401-7059.

What Causes an Electrical Surge in Thibodaux? » « Ways To Maintain Your Generator