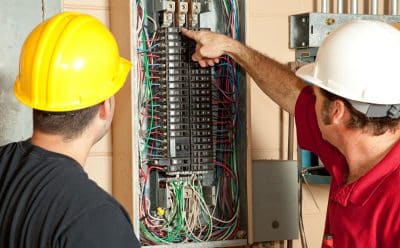 Your electrical panel is hub of your home’s electrical system. It receives the electricity coming in through your meter and distributes it to the outlets, appliances and light fixtures in your home. It also monitors the amount of electricity going to each place, giving more to higher energy users and less to lights and appliances not in use. It’s even able to detect when a circuit has too much electric current being pulled from it and kill the power to that circuit.

In other words, it’s one of the most important fire safety mechanisms in your home. So it’s vital that you make sure it’s up to code and working safely. An old or insufficient electrical panel won’t be able to effectively power your home or protect it against electrical fires. Be sure that your panel is safe by checking that it doesn’t show these five signs of needing an upgrade.

1. Your Home Has A Fuse Box

Fuse boxes and fuses aren’t necessarily an immediate fire hazard, but they are quite outdated. Homes haven’t been built with fuse boxes since the 1950s, and if your home is still using one its electrical infrastructure likely isn’t able to properly meet the electrical demands of a 2010s family. Because of this, many insurance companies won’t cover homes with fuse boxes. If your home uses fuses and a fuse box, Doug’s can help you upgrade to circuit breakers and an electrical panel.

Changing your floorplan—from adding rooms to simply rearranging the existing layout—means making significant changes to your electrical system. Whether you’re keeping it small by installing additional outlets or building on a whole new wing, your existing electrical panel may not have the ability to accommodate the additional electrical output. Upgrading to a newer, expanded panel will allow your home to function better with all the electricity it needs.

3.You Use Tons of Extension Cords

Extension cords are useful for giving your vacuum cleaner the range to do a whole floor rather than a room at a time, but you shouldn’t use them in place of properly-wired outlets. If your home doesn’t have enough outlets, it’s probably because you have an outdated electrical panel without the ability to support more outlets. Rather than risk causing a fire with a daisy chain of extension cords, call Doug’s to upgrade your electrical panel.

4.You Have Frequent Tripped Breakers

When your breakers trip all the time, it’s a clear sign that your panel isn’t sufficient to handle the electrical load your house requires. For instance, if the shared wall between your kids’ rooms is on a single circuit and they both have computers in their rooms, that’s a recipe for a tripped breaker. Instead of resetting the breaker every time they both use their computers or creating a computer use schedule to avoid their rooms going dark during homework time, just install an upgraded panel.

5.You Have Signs of Faulty Wiring

This is actually more indicative of a need to upgrade your entire electrical system, but when upgrading the whole system the panel generally gets upgraded as well. Signs that your wiring is going bad include flickering or dimming lights, outlets that appear burnt, shocks from your appliances and the smell of burning metal near receptacles. These are all serious fire risks, so don’t waste any time getting your bad wiring fixed!

No matter what electrical issue you’re having, Doug’s has the knowledge and experience to resolve your problem and get your life back to normal. Call us at (985) 222-2913 to get started!

Cracked Heat Exchanger » « How Does A Heat Pump Work In The Winter?